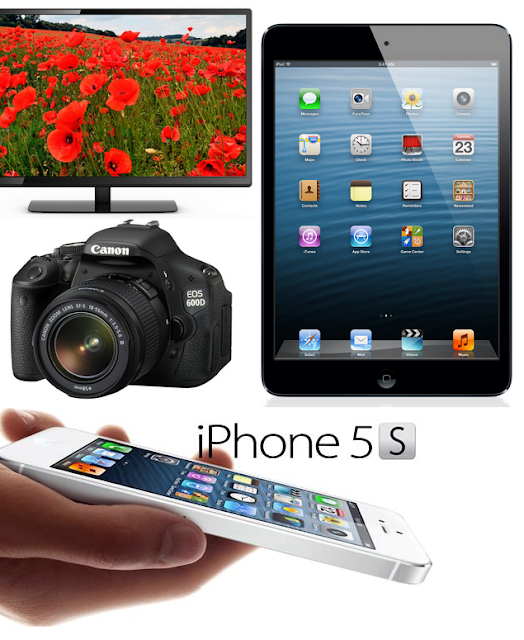 ¡Hola! so recently my want list has changed from fashion and beauty products into electrical’s!

Because I am currently in the middle of revamping my room, it’s literally bear and I spend no time up there what so ever. But when everything finally gets sorted I’ve decided I want to invest in a new television for my room as my old one wont work anymore with the whole ‘digital switch-over’ con now in place. So if I’m going to get one I thought I may as well get something half decent ’22-24 inch, HD TV, with built in DVD, free-view etc.’ I’ve only had a brief look into them at the moment and they seem to be around £150.00 which I didn’t think was too bad.

I also really want to invest in a new camera, I’ve been through loads of compact camera’s which have either been stolen, lost (probably stolen again) or have broken, so as far as compact camera’s go I’m happy using my ‘Nikon Coolpix’ for general use and then my ‘Fujifilm Finepix Z’ for my night’s out etc. But recently I’ve found myself dreaming of buying a ‘Canon DSLR Camera’ strange I know, but then I decided I actually would really like one, as I did used to be quite into photography when I was a bit younger, and I’d like to get back into it, and it would be especially useful to capture amazing holiday snaps. I wouldn’t go for one that was too expensive but I would want one that was good quality with a good resolution so I was thinking of looking into buying the ‘EOS 600D’ which I have seen on a few different websites for around £400.00 including the 18-55mm lens, not too bad price if it’s going to get it’s use.
I’m still in need of an iPad, I don’t really mind which one but the Mini seems to be the cheapest so I’ll probably just settle for that one. I keep deciding to buy one then changing my mind thinking ‘do I really need one?’ but at around £270.00 I think I’ve come to a conclusion. Yes I do.
And I don’t know if it’s just because I’m a computing student or if everyone else is just as keen. But I literally can’t wait for the new iPhone to come out, I’m constantly keeping up with the news articles, with the whole idea that there will be a release of the ‘iPhone 5S’ along with the release of the ‘iPhone 5C’ which could stand for colour or it could stand for cost as there is this idea that Apple are releasing a ‘Low-Cost iPhone.’ I read that the IOS 7 release date is the 16th September, and I am so excited to try out the new software and see some of the amazing features, I have tried this software already a few months back when it was still ongoing construction and I thought it was really good however there were too many bugs in the software so I went back to IOS 6 and decided to wait until the official release date. But yes that is something I am looking forward to, and I believe there have been rumors that the new iPhone’s will be released on the 20th September, lets wait and see!
HOLA JOANNE