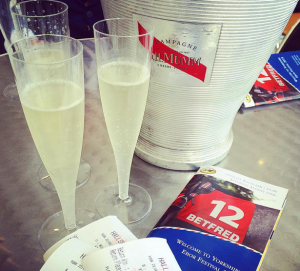 So last weekend I was at York Races Ebor Festival for a friends 22nd Birthday! I have to say it was not half as busy as the 56th John Smith’s Cup, and that was a good thing as the que’s for the bars and toilets were minimal, which made a nice change!
There was only five of us so it was a small group outing but at least there was no chance of losing anyone! We decided to just get Grandstand & Paddock tickets again, as we had a good time before in this section and they are a quarter of the price of the County Stand. 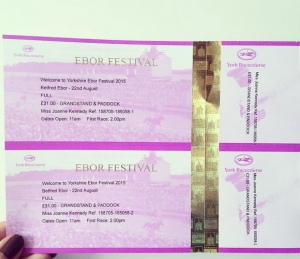 The first race started at 2:00pm and the gates opened at 11:00am, we were there in plenty of time, arriving at around 12:30pm, but even then, all the tables by the racecourse were full. We started by sitting on the outdoor stairs with a good view of the racecourse but the sun was beaming down and unfortunately there was no shaded area so we shortly moved inside the canteen which was where we had spent most of the John Smith’s Cup. 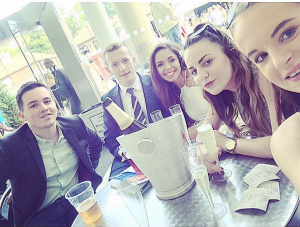 Inside there was plenty of tables, plenty of screens, toilets and a stand to put your bets on, perfect! occasionally we took it in turns to go and watch the race from the racecourse properly but I was more than happy to be bag and drink person sat comfortably!
Because we already knew drinks were pricey we decided to go straight onto the bottle’s of prosecco for £21.50 which I think isn’t too bad! although by 6:00pm which I think was the last race, we were slightly a little worse for wear! to make matters worse the rain began just as we were on our way back to the train station, I say rain it was more like a flood! 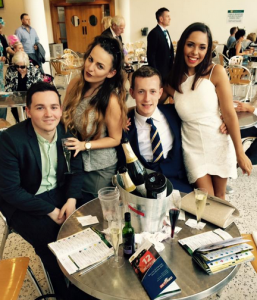 We were planning on going to a few bars in York but we were that drenched we just headed straight back to Harrogate! Apart from the rain it was a really good day out and I would definitely recommend going to next years!